Over the last few months I’ve been watching Korean dramas with some of my friends. I find them preferable to their American counterparts for a few reasons.

For one, they’re often cleaner, and if the characters do swear, they do so in another language to where the subtitles filter it out and you don’t actually “hear it” (or, at least, don’t understand it like you do when characters swear in English).

Two, they tend to favor “fade to black” moments where you assume what’s happening between a couple rather than actually having to see it, which means I can watch around my young boys without worrying about what they might see (though I do have to watch out for violence, but even then, it’s hand-to-hand rather than gunshots and gory wounds most of the time).

Three, they have frequent occurrences of humor which stems from characters and situations rather than sexual innuendos or crude humor.

And four, they explore ideas through the stories rather than just follow a formula to the end, making for very interesting, thought-provoking conversations (which may or may not interrupt the watching of said shows). 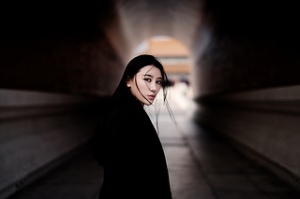 However, there are times when episodes seem to go “off on a tangent.” From what I understand about their structure, the shows can grow over the course of the filming to where a story might have to be stretched thanks to the network demands, but even when this doesn’t seem to be the case, they can end up having awkward plot twists that seem unbelievable from the characters’ points of view.

I’ll look at Because This Is My First Life as an example. The story is about a couple who get married, not because they love each other but because he needs a paying roommate and she needs a place to live. The marriage starts out being purely one of convenience for both. An “arranged marriage” meets needs they have but does nothing for their hearts, and the show explores how they feel about that as time goes on.

Over the course of the show, we also get to see the general plight of single men and women through the couple’s friends. One woman has been dating her boyfriend for years and just wants to get married. Another has been very casual about dating, going on “flings” rather than settling down or really seeing anyone steadily, and many of the characters work for a company that runs an online dating app. We explore their parents’ expectations about marriage and relationships versus their own feelings…and this brings us to a couple zany episodes in the middle.

The wife has a part time job at a cafe and the husband is worrying about her. Her coworker seems excessively interested in her, and there are clues that suggest he might be a stalker. In the end (spoiler ahead) he turns out to just know as much as he does, not because he’s been stalking her, but because he was hired to serve as a waiter at their wedding and was there for the wedding pictures, even to the point of suggesting a more romantic pose between husband and wife at one point.

Now, given how prominent it turned out he was at the wedding, I can’t believe neither the husband nor the wife recognized him. From a plot point of view, it’s illogical. The whole episode does nothing for the overarching story (save to provide a moment for the husband to swoop in and “be the hero”), and it’s just such plotting that leads readers to complain about author’s contriving things and stories not being realistic.

However, having watched a number of Korean dramas that similarly have moments where they “go off elsewhere,” I’ve come to realize the stories aren’t designed to be tight, plot-driven, and logical. Their goal seems to be thorough exploration of a theme. In the case of Because This is My First Life, the examination of modern romance wouldn’t be complete without discussing the dangers that come from online dating, the “are they a stalker or not” questions that people have to consider, even if they end up being all worried for nothing.

Similarly, in another drama, W (which is probably my favorite so far), we explore the world of fiction and how authors control their worlds (or don’t) through an online comic series. The daughter originally created the hero when she was young and her dad borrowed her creation for his own work, but now, after writing about him for years, he’s tired of him and wants to kill him off.

She doesn’t want the character killed, though, and she gets pulled into the world of the story to save him. Over the course of the series, we get to see arguments about stories being plot- or character-driven and whether authors put themselves into their creations or not, exploring whether creativity is a gift or a burden and whether an author has an obligation to his characters, his fans, etc. Some scenes (especially those where he and his daughter are dealing with fans of the comic series) could be seen as having nothing to do with the central “plot triangle” of the comic’s hero and the father and daughter, but they further the theme by showing yet another element to fiction.

Thus, if you look at their editing through the eyes of logic and a tight story, some of their “page time” is wasted on elements that aren’t central to the story or the concerns of the characters. However, if you look at it from the perspective of theme, you realize that they aren’t “wasting page time” or adding fluff in moments like these. They’re rounding out their examination of a theme, and because theme seems to matter more than story in these dramas, they’re actually being true to their genre by having these tangents included in the finished product.

Now, as an author and editor, I wouldn’t recommend following a similar editing structure unless your genre supports it. Otherwise, readers will run into the tangents and balk (especially if you tried to incorporate something only loosely related into a mystery or thriller, for example). But learning to consider whether something is related to the story in a different way can help you expand your creativity to where you can see opportunities to enrich a story. Instead of sticking to a tight formula, you can actually set the story up for broader, richer implications to where tangents and thematic explorations aren’t just seen as “fluff” but as part of the work as a whole (as some of the best Korean dramas seem to achieve).