As writers and artists, we’re always looking for ways to express things better, to show our readers and audience how a character is growing, developing, and changing, and recently, through watching The Glass Slipper, I encountered a new means of adding to the “show, don’t tell” techniques: dance.

The plot is that of Cinderella, with Leslie Caron as the main character, but it plays more attention to the characters than many. There is no magic, no spells, just ordinary people making extraordinary things happen (and it has the most delightful “fairy” godmother I’ve ever met, an eccentric old woman with a delight in words and phrases like “pickle relish” and “elbow”). But what particularly struck me was how they used dance in the story.

For the earliest part, Ella has no friends. No one she can talk to. She’s tried sharing her dreams in the past and been met with ridicule, so she’s become snippy, grumpy, and dirty, telling herself she doesn’t care and it doesn’t matter what others think. Then she meets her godmother at a pool outside her village, and she gains a friend whether she will have her or not, one who is every bit as stubborn though a great deal nicer than herself. She returns to the pool and ends up meeting the prince, who becomes her second friend.

Unlike with her first friend, though, she feels that with the prince she doesn’t even have to explain herself, doesn’t have to share anything because he already understands her…and then the dancing begins. He teaches her to dance, and through dance, she has an outlet for all the pent up thoughts and feelings she’s been keeping bottled up for so long. Suddenly, the movie has dream-dance sequences, as she lets herself feel and express herself without words, and it mirrors the way she feels about her life as the prince (who she thinks is the cook’s son) expands it and makes it delightful again, as it hasn’t been since her mother died (if it was even delightful then).

In many movies, dance is just a fun aside from the plot or a means of giving the characters a different, more intimate chance to interact, but in The Glass Slipper it actually becomes a means of character development, showing how she changes and what the companionship of the prince means to her, as the dances expand those moments of togetherness.

This post is part of the “En Point: A Ballet Blogathon.” Other posts can be found here. (And I’ll be elaborating on how to use dance and other plot devices to show, not tell, in my next post.) 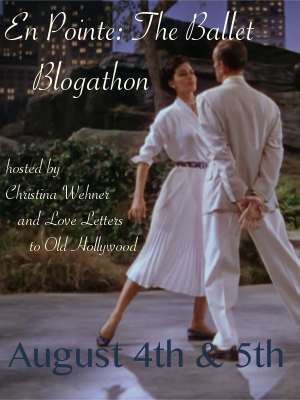 Images by davidpwhelan and Christina Wehner, Creative Commons and used by permission

12 thoughts on “Dance as a Means of Showing, Not Telling”