My A-Z Blogging theme is to cover 26 touch-me-not categories of fiction writing. These are frequently the trouble spots which can be useful components of the story if handled properly, but when rushed through, can cause all kinds of trouble. While the genre is fantasy, the tips can apply to anything, from romance to literary fiction. 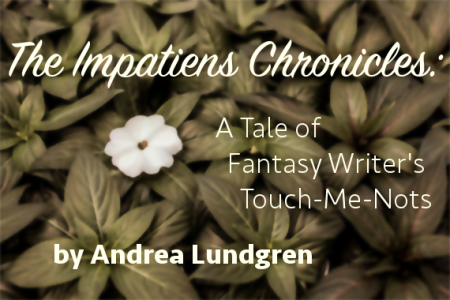 While exploring the ruins of an old castle, Mordekai and his sister Monique accidentally destroy an old tower only to find themselves in a different place, or time, entirely. Then a giant goat crashes through the wall and carries Mordekai off, leaving Monique with the unpredictable Princess Mural, who insists that they leave the castle immediately.

Mordekai felt the flying goat shift, and he opened his eyes. He saw a building, at the strangest angle possible. He quickly swallowed and closed his eyes, hoping they’d be done banking soon. We must be landing. From what he’d see, the building was a large, square one, of dark stone…capable of being a fortress. And, given how Brisbane doesn’t want to be seen, it’s probably a nasty place. Full of dungeon cells and implements of torture. He pushed the last thought from his mind. Just in case the flying goat was telepathic, he didn’t want to give it any ideas. And in a fantasy world, you can’t be too careful.

Following Mural, Monique left the castle and was soon in the surrounding woods. She had to dodge gnarled branches and dormant undergrowth, and she couldn’t imagine how Mural was managing with her long skirt. Good thing it’s winter here. Or fall…early spring? It was hard to tell. She didn’t see a great deal of new growth, but it wasn’t that cold. Chilly, much more so than it’d been in the ruins, but it wasn’t cold. Yet all the fallen leaves seemed old, as though they’d been underfoot for longer than a few weeks. Maybe there is no time in this place.

Mordekai tilted his head as they neared the fortress. Brisbane had disappeared, but he considered that a good thing. So long as he doesn’t try to hide in my pocket, I’m not worried about him. Mordekai could now see an inner courtyard beneath him, and there were dark shapes around the outer edges. Knights? Or Mural’s uncles? She had only mentioned the one, but for all he knew, there might be more.

Then, without warning, the goat tossed its head. He went flying, careening through the air until he crashed into something soft and prickly. And musty. But before he could climb out of the haystack, he felt a number of somethings grab him by his jeans and drag him out, face down. He quickly shielded his head as his knees hit the cobbles, and then the everything stopped. There were a few sharp raps, the sound as clear as a blacksmith’s hammer and as loud as thunder, but nothing had hit him…yet. Then a voice broke the silence.

“So…where are we going?”

“Do not speak,” Mural said. “My uncle’s army could be in these woods. Just follow me. We must reach any abbey, where we’ll find help. Even the strongest spell could not harm the monks.”

Monique made a face. No. Not a spell…just the lapse of time, apathy, evolution, and religiosity. She knew that others had once believed in “holy men and women,” but she’d seen too much to rely on anyone else. Bending over, she picked up a good, thick stick, just to be on the safe side. I don’t think Miss Princess has a weapon, but no matter what happens, I’ll take care of myself.

As soon as your main characters split up, you’re stuck with juggling storylines, which presents the author with a range of challenges. How much time do you spend with each character? When do you break off? Do you end on an exciting development, or finish your thought or scene before moving on? Ultimately, you want the story to flow to where one scene follows the other with the least amount of confusion and disorientation.

In the above example, I chopped up the two storylines into four segments. We went from Mordekai to Monique, then back and back again, without any good reason for switching.

So what is a good reason to switch and pull out of a storyline?

However, because Monique’s scene has nothing to do with what’s happening to Mordekai, it can just feel like an unnecessary distraction, especially since, in this case, Brisbane has already disappeared. But if Mordekai and Brisbane were in the middle of an argument, we might need a different scene in between to indicate the switch, as it might otherwise be confusing to go from one side of the argument to the other.

But it can also make the reader less likely to pay attention to what happens next in their eagerness to get back to the original storyline, and it can frustrate them because you constantly chop things up and leave them hanging. So using it for pacing’s sake can be tricky.

None of the above is the case for this story, so the switching around was unnecessary. I could’ve easily stuck with Monique and had her entire scene, up to and including the information about where they’re going, before returning to Mordekai. It would’ve been simpler, easier on the reader, and less jolting…which is the ultimate goal when it comes to juggling storylines.

Until the next letter,