Whenever you write a character into existence, there is an expectation that you must describe them. You’ve made them, so you have to tell other people what they’re like, elaborating on the height, weight, eye color, hair color, skin color, general features, behaviors, and facial features…or so some readers would have you believe.

Yet, if you look at literature through the years, there have been many memorable characters who weren’t described in much detail at all, and some authors, instead of giving all the physical information at once, relegated such details into tiny packets that are given out over chapters, not minding that the reader is left in the dark about things like hair color or eye color. 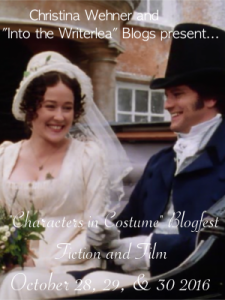 First, I wanted to look at a rather minimalistic approach as seen through Jane Austen’s Elizabeth Bennet from Pride and Prejudice.

Lizzy is introduced in Chapter One as having “something more of quickness than her sisters.” Then, in a few chapters, we’re told that she’s “very pretty,” but not handsome enough to tempt Mr. Darcy. Then, later, we get the following paragraph.

“Mr. Darcy had at first scarcely allowed her to be pretty; he had looked at her without admiration at the ball; and when they next met, he looked at her only to criticise. But no sooner had he made it clear to himself and his friends that she hardly had a good feature in her face, than he began to find it was rendered uncommonly intelligent by the beautiful expression of her dark eyes.

“To this discovery succeeded some others equally mortifying. Though he had detected with a critical eye more than one failure of perfect symmetry in her form, he was forced to acknowledge her figure to be light and pleasing; and in spite of his asserting that her manners were not those of the fashionable world, he was caught by their easy playfulness.”

Her figure is “light and pleasing,” which is left to the reader to interpret, and we’re told she has dark eyes. But whether dark hazel or black or brown, we don’t know, and we still aren’t told what her hair color is, even by the end of the book, even though the author has a few splendid opportunities for sneaking it in–once, when two characters are discussing the sad state of Miss Bennet’s hair as a result of walking across country to see her sister, and another time when she’s in the middle of having her hair arranged.

It is almost as though the author deliberately avoids telling us too much about what her characters look like, yet this choice doesn’t seem to have alienated readers, for most have always had a strong sense of who and what Elizabeth Bennet is. Much like the appearance of rooms, which is left entirely to a reader’s imagination, a character’s appearance is hinted at but not “spelled out.”  Readers build on the outline Jane Austen gave us, which can create just as strong (if not a stronger) sense of appearance as a laundry list of attributes, since the reader’s own imagination gets to fill in the blanks.

The minimalistic approach isn’t commonly adopted by writers, but it is certainly a choice that we can use. We don’t “have to” describe everything. Physical features can be eluded to rather than being the driving force behind a memorable character, though I imagine that readers generally craft a sense of “Lizzy-ness” more from her dialogue and behavior than from her looks. If there isn’t that much to set a character apart in terms of appearance, it might be best to skip it and move along with the story rather than belaboring minutiae that ultimately won’t be remembered anyways.

Tomorrow, we’ll examine a more detailed description of a literary character in Anna Karenina…a sort of “medium” option when it comes to character appearance, and on Sunday, we’ll look at the full and complete description, done well, in Miss Havisham from Great Expectations.

And it’s not too late to join us in the “Characters in Costume Blogfest.” Click here to see the list of participants and to join the fun this weekend. 🙂