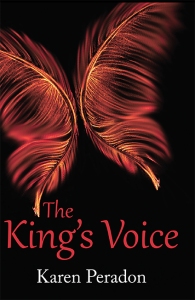 Description from Goodreads/Author’s Website: The King’s Voice is a page turning fantasy novel set in the vast and vibrant land of Goaero. The story begins with a mute king whose voice has been stolen away. His brother, the evil Prince Encoda bestows soldier Mallory with the quest to find it.
Happy to be on a mission at last, Mallory soon loses his way despite his sixth sense. On his travels he meets many people including the winged Quills.
Meanwhile, the dark-haired Kafia is a young secret-keeper whose secrets are leaking out. When she discovers the king is missing she sets out to find him. As her journey takes her through Goaero she becomes a Crone with special powers.
An orphaned boy leaves Shapeshifter Territory, on the edge of Goaero. He cannot remember his name. He treks through the country looking for answers.
In this beautifully rich story of loss and belonging three souls come together to find peace in unity. But do they find the king’s voice?

Book Review: Honestly, I think the cover and the concept of trying to find the king’s voice intrigued me more than the book description. Missions, special powers, and people who don’t know their identities are fairly common fare for fantasy, but the author, haling from Australia, also had the benefit of being the first from that country to contact me requesting a book review, so I agreed.

And I’m very glad I did. The book is a prime example of reader-response fiction (as found regularly in literary novels), where the goal isn’t so much to tell a story as to immerse you into a world, a feeling, an emotional journey about generosity, open-heartedness, and life. The book itself is full of little, folk-tale type stories, and the overall impression is that life is fuller and richer than we think.

So here is a closer look at the Narration, Content, Characters, Artwork, World Building, and Overall Response.

Narration: Four out of Five. The descriptions are fanciful, whimsical, and yet entirely believable in the world of the story. Goaero feels like a place from one’s dreams, where one wants to visit, not to see the concrete objects, but to experience the feeling of being there. Thus, to a degree, what happens in the story doesn’t feel real, in a sense of my being worried about the characters surviving, because it feels like it all happened long ago, and will all happen again, somehow. (I know: not very technical, yet, in a novel designed to appeal to one’s emotions, the narration is crucial and the author does a great job making it work.)

Content: Three out of Five. This is a hard one to gauge, but I felt like the story wandered, just a little too much, even for a experiential novel. There were times when I found myself really wondering when we’d move forward and discover the whereabouts of the king. Not that the side-stories were boring, but the many folk-tales did make one feel that the plot wasn’t going anywhere.

And a lot of this has to do with expectations. Knowing now that this novel isn’t about the plot–that it isn’t supposed to be like other fantasy novels, like The Lord of the Rings or Sword of Shannara or Magonia or Child of a Hidden Sea any of the other fantasy-genre novels I’ve read–makes a big difference. This is literary fiction, set in a fantasy world, and as such the reader has to be patient and let the novel take you where it wants to go.

That being said, unlike a lot of other literary fiction, this novel is very clean. No swear-words, no adult content. You could read this as a bedtime story for your kids, and the length of it and the morals of the story could make for some very interesting discussions.

Characters: Four out of Five. The characters are as real as the world they populate, yet they don’t feel human. They’re too non-reasoning; they take things in stride a little too well, as though they somehow know that everything that happens to them is just part of a larger story. They have emotions of their own, but they are like characters out of folk or fairy tales: they represent a whole world, a whole way of living, and are larger than a single person.

They are interesting and engaging, though, and as the story picks up, your interest in what happens to them increases, which is partly why it becomes harder to be patient through the “folk tale” rabbit trails that show up every few chapters. (Another thing that intrigued me was how Prince Encoda wasn’t really evil. Despite the description, he’s actually quite relatable, and every bit as flawed and archetypal as the others. You don’t feel like he wants to rule because he’s evil, but because that is his role in the story.)

Artwork: Subjective. As I said before, this is one of the reasons I picked the book up in the first place. The combination of title and book cover were great, and, now that I’ve read the story, the imagery of the two feathers makes even more sense and is even more symbolic than I thought.

World-Building: Three out of Five. This is, paradoxically, the strongest and weakest part of the novel. Everything fits in the goal of creating a feeling, of building towards an emotional experience, which is it’s greatest strength–and yet, everything is so non-scientific as to not make sense in a real-world way.

The Beach Eater is a great example of this problem. We know that it is somehow attacking Goaero, destroying the land and only being held back in some places by the force of waterfalls, but what it really is and how it works is never discussed. I know this is fantasy, not science fiction, but there were a number of things that just didn’t make sense in a working-world context. Pearls at the base of people’s spines, the way the Quills feed off the air, the heart’s desire compass, the crones…there was a world of things that didn’t feel like it worked in any kind of systematic way. But, as an extended fairy/folk tale, where the goal is an emotional and not a logical response, this isn’t a critical problem (but in the fantasy genre, it does contribute to setting this book apart and more firmly entrenching it in the literary genre).

Overall Response: Fourteen out of Twenty, or an average of 3.5 overall. This is a book I’d reread to relive the feeling it gives you, but it doesn’t create a world I felt I could visit and explore. It is one of the most unique novels I’ve read, but I’m extremely grateful to Ms. Peradon for sharing it with me, as it helped me understand the sub-genre of reader-response fiction and how one can write for an emotional response in a positive way, leaving a reader delighted instead of feeling depressed (like most other reader-response books I’ve read). Still, it is definitely a literary novel, so if you’re looking for another fantasy-adventure novel, this might not be the best choice.