I’ve been looking forward to writing this for some time. And now that we’re at “P”…here goes!

Early on, I’d never heard of the difference between pantsters and plotters. I just wrote.

But then, as I interacted with other authors, I came to realize that everyone doesn’t write a story in the same way. Some people plan it all in advance. Others just flow with it, discovering things as they write. So here are the pros and cons of the two “systems” of writing. 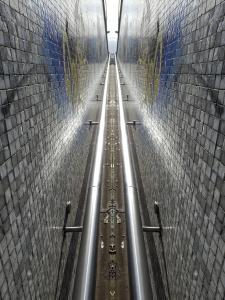 Plotters: People write with their plot laid out before them, straight and narrow (and quite possibly, with walls on the sides). They know where they’re going and get there, exactly as they expected. Writing fiction is no different than writing a thesis paper or an article. They all follow a prescribed route, going from Point A to Point B and then on to Point C without detours or rabbit trails.

Pros: The discovery happens in the planning, so when you actually sit down to write, you aren’t side-tracked or thrown off by something a character says or does. You will probably not face as much writer’s block, save in the planning, because you’ll already know where you need to go and how to get there. And this can lead to being able to write more novels, faster, because you don’t have to rewrite as much.

Cons: Unless you’ve spent enough time in the planning stage, with an open mind, you can end up making your plot (and characters) go a certain way, even though they’d probably choose a different route. In the much-quoted and much-discussed interview on one of the main romances in Harry Potter, J. K. Rowling (who is supposed to be quite the plotter) spoke of how her writing style may have affected her writing:

“I wrote the Hermione/Ron relationship as a form of wish fulfillment. That’s how it was conceived, really. For reasons that have very little to do with literature and far more to do with me clinging to the plot as I first imagined it, Hermione ended up with Ron. I know, I’m sorry, I can hear the rage and fury it might cause some fans, but if I’m absolutely honest, distance has given me perspective on that. It was a choice I made for very personal reasons, not for reasons of credibility. “

This doesn’t mean it’s bad for the plot, or even that a different romance would’ve been “right,” but it does suggest some of the pitfalls a plotting writer can encounter because he or she already has an envisioned plot and writes to flesh out that plot–not to discover a new one.

Pantster: People who write to discover the story. This doesn’t mean that they have no idea of the plot–they may have plot outlines, or even have written a version of the story already–but they are committed to letting the story unfold as it is written, not as it was already envisioned. The path disappears from sight, as far as they’re concerned, and while it may go straight after that dark tree…it might also lead downhill directly to a dragon’s lair. They won’t know for sure until they write it.

Pros: Writing (the real work) gets sweeter by having discoveries tucked into the task. You are free to abandon earlier ideas, scenes, or whole characters at will, because nothing is “set in stone.” Romances are completely up for grabs, and you get to be along for the ride, just like a reader (or your characters).

Cons: Because your writing craft is like a sailboat, directed by the winds, you can end up far off course. You may go from A to B by way of Z, W, and L … only to realize that your story is too long and the pacing too slow. Not having a concrete plot usually means more rewrites, as you pare down the story from its sprawling form into what it should be (for the sake of pace, focus, etc.). And more rewrites means it can take you much longer to go from the story idea to a finished product.

What do you think? Did I leave out a major benefit or challenge? Which way do you write?

19 thoughts on “A Pantster or a Plotter: How Do You Write? #amwriting #atozchallenge”