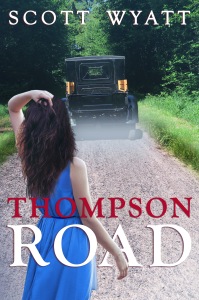 Description courtesy of the author: A sweeping, coming of age love story set in the Pacific Northwest on the brink of WWII. Rejected by classmate and accomplished swing dancer Sally Springs, high school quarterback Raleigh Starr remains desperate to win her heart. While walking home on Thompson Road, Raleigh catches sight of Mona Garrison, dancing at her bedroom window. He is mesmerized. Still determined to dazzle Sally, Raleigh asks the shy sixteen year old to compete with him at the state fair swing dance contest, and she agrees. Swept up in the war, Raleigh realizes too late what Mona has always known: that they are perfect for each other… but he is unaware of the terrible price she has paid for his attention. Thompson Road is a poignant, tender story that reminds us of the power of first love.

I received a copy of this book (release date: September 15th) in exchange for an honest review.

This book actually confused me for a while. It’s described as a “coming-of-age” story, which made me think things would be resolved while the protagonists were still young adults (or, at the very least, “new adults”). But the story kept on going, and I realized its scope was far broader. It is a “coming-to-maturity” story, really, and as such, it covers ten years or so of the protagonists’ lives.

Here is a closer look at the novel, examining its narration, content, characters, artwork, and world building.

Narration: 4 out of 5. Overall, the narration was carried by the dialogue, but I felt it was very effective, with variations based on character. Some of the language was rather strong, though, and that, combined with the content, makes me feel that this book would be inappropriate for a typical young adult readership.

Content: 1 out of 5. I felt like this was the novel’s weakest point. The narration, while being representative of the characters (particularly Raleigh), was so objectifying of the female characters as to border on being strongly offensive. They were constantly being depicted as a bundle of desirable body parts and nothing more, and at one point we witness the beginning of Raleigh’s sexual fantasizing and self-gratification in response to another character’s behavior. (Thankfully, Raleigh does come to maturity and realize there is more to women; at one point, late in the novel, he calls a woman “beautiful” in his thoughts without seeming to see her as a sexual object.)

I also felt that the broad content contributed to my confusion. I found myself unsure of what the story was about until the last fourth of the novel.

The beginning was very young-adult in focus, with everything riding on asking a pretty girl out or in hoping the bullies on the bus leave you alone. Then, WWII begins, and we experience the action of a Japanese air strike and being stationed in the Pacific, juxtaposed with scenes that focus on the marginalization of the feeble minded. To round everything out, there is some legal documentation–added verbatim– a little courtroom drama, and a fair dose of “will-they-won’t-they” as the romantic couple navigates in and out of each others lives.

Characters: 4 out of 5. The characters were very consistent, and following their journeys to maturity was really the driving force behind the novel. Mona was very likable, and highly relatable as the misunderstood young woman whose dreams seem impossible. I found it much harder to like Raleigh. Right from the beginning, he struck me as selfish and obsessive, and I felt he didn’t change until late in the novel. Still, most of the cast of characters felt real and genuine, like they could’ve truly existed at one point.

Artwork: Subjective. I really liked the crisp, colorful cover image. I wasn’t sure of the historical accuracy of what the young woman (presumably Mona) was wearing, but the car driving away makes it clear that this will historical fiction.

World Building: 3 out of 5. The world of the story was fairly cohesive, but I didn’t feel it was consistent with history. For example, there was no talk of rationing, even after the war began: people kept driving from place to place as though no war existed. Before the war began, the attitude seemed to correspond more to that held during the fifties and early sixties (reminding me strongly of Grease) than that of the closing years of the depression leading up to the war.

And, though the young people volunteered for service, there didn’t seem to be much corresponding volunteerism among the older generation or the women (save for one girl who worked with the Red Cross). So while it never violated the fictional world, I felt it failed to correspond or represent the real, historical world.

Overall Response: 12 out of 20, for a total of 3. As literary fiction, this reminded me a bit of works like Happy All The Time by Laurie Colwin. The pacing was slow, giving you plenty of time to absorb the various viewpoints and the “life” that these people were living. If you prefer to experience the little moments of literary lives instead of bounding from climax to climax, and you enjoy novels that, as a whole, comment on the nature of the human experience, you might want to give Thompson Road a try.